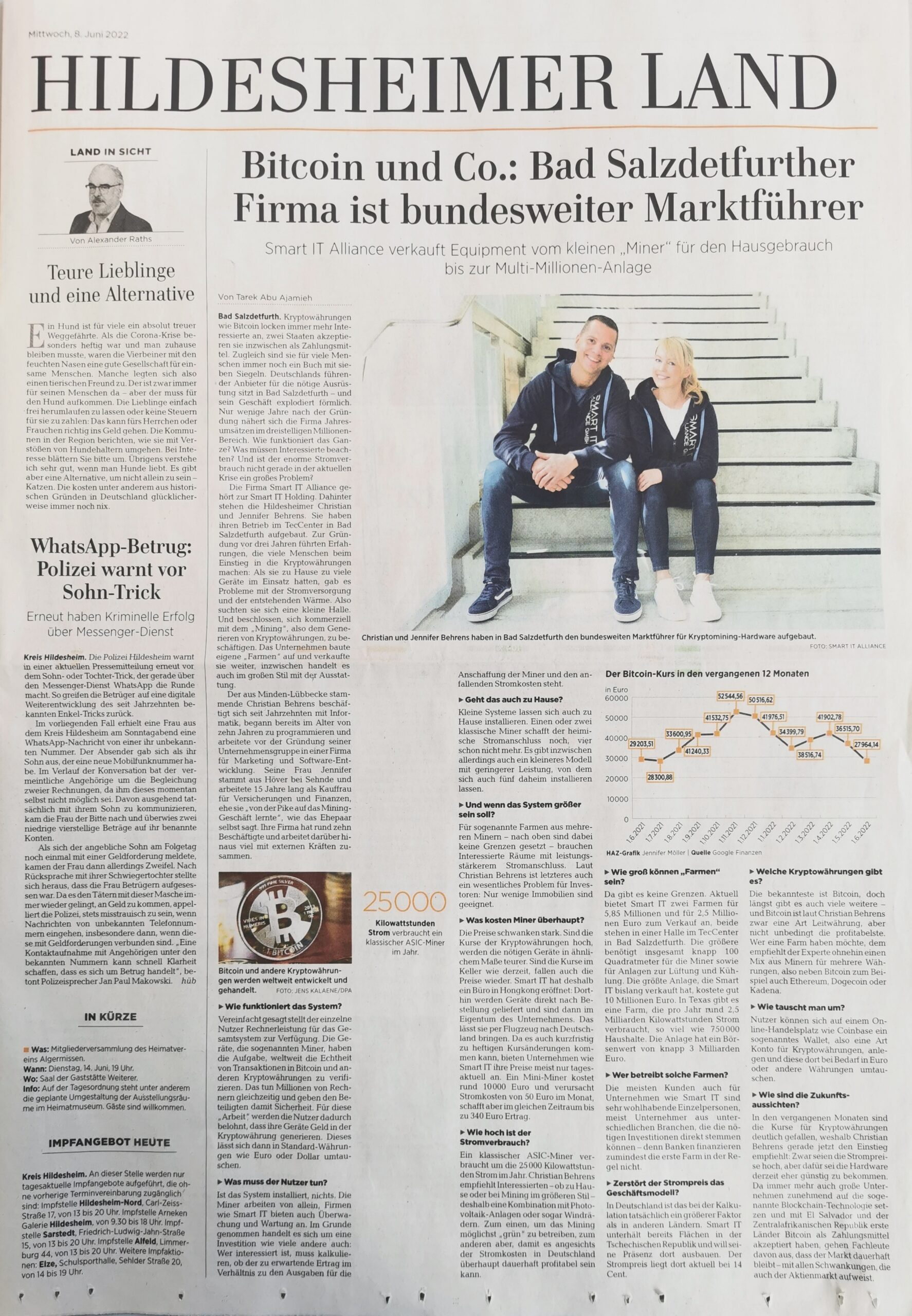 Bad Salzdetfurth - Cryptocurrencies such as Bitcoin are attracting more and more interested parties, and two states now accept them as a means of payment. At the same time, for many people they are still a closed book. Germany's leading supplier of the necessary equipment is based in Bad Salzdetfurth - and his business is literally exploding. Just a few years after it was founded, the company is approaching annual sales in the three-digit million range. How does it all work? What do interested parties have to consider? And isn't the enormous power consumption a big problem, especially in the current crisis?

The company Smart IT Alliance belongs to Smart IT Holding. Behind them are Christian and Jennifer Behrens from Hildesheim. They set up their operations in the TecCenter in Bad Salzdetfurth. The company was founded three years ago as a result of experiences that many people have when they get started with cryptocurrencies: When they had too many devices in use at home, there were problems with the power supply and the heat generated. So they looked for a small hall. And decided to deal commercially with "mining", i.e. generating cryptocurrencies. The company set up its own "farms" and sold them on, and now it also trades in equipment on a large scale.

Christian Behrens, who comes from Minden-Lübbecke, has been involved in computer science for decades, began programming at the age of ten and worked in a marketing and software development company before founding his group of companies. His wife Jennifer comes from Höver near Sehnde and worked for 15 years as an insurance and finance clerk before she "learned the mining business from scratch," as the couple says. Your company has around ten employees and also works a lot with external staff.

How does the system work?

Put simply, the individual user provides computing power for the entire system. The devices, the so-called miners, have the task of verifying the authenticity of transactions in Bitcoin and other cryptocurrencies worldwide. Millions of computers do this at the same time, giving those involved security. For this “work”, users are rewarded by their devices generating money in the cryptocurrency. This can then be exchanged for standard currencies such as euros or dollars.

What does the user have to do?

If the system is installed, nothing. The miners work on their own, companies like Smart IT also offer monitoring and maintenance. Basically, it is an investment like many others: If you are interested, you have to calculate whether the expected yield is in relation to the expenditure for the purchase of the miners and the electricity costs incurred.

Is that also possible at home?

And if the system is to be larger?

For so-called farms consisting of several miners – there are no upper limits – interested parties need rooms with a more powerful power connection. According to Christian Behrens, the latter is also a major problem for investors: only a few properties are suitable.

What do miners actually cost?

The prices fluctuate greatly. If cryptocurrency prices are high, the necessary devices become similarly expensive. If the courses are in the basement as they are at the moment, the prices will fall again. Smart IT has therefore opened an office in Hong Kong: Devices are delivered there immediately after they are ordered and are then owned by the company. This allows them to be brought to Germany by plane. Since there can also be sharp price changes at short notice, companies such as Smart IT usually only offer their prices on a daily basis. A mini miner costs around 10,000 euros and generates electricity costs of 50 euros per month, but generates a yield of up to 340 euros in the same period.

What is the power consumption?

A classic #ASIC #miner consumes around 25,000 kilowatt hours of electricity per year. Christian Behrens therefore recommends a combination with photovoltaic systems or even wind turbines for those who are interested - whether at home or with #mining on a larger scale. On the one hand, to operate the mining as "green" as possible, but on the other hand, so that it can be #profitable in the long term in view of the #electricity #costs in #Germany.

There are no limits. Smart IT is currently offering two farms for sale for 5.85 million and 2.5 million euros, both in a hall in the TecCenter in Bad Salzdetfurth. The larger one requires a total of almost 100 square meters for the miners and for ventilation and cooling systems. The largest system that Smart IT has sold to date cost a good 10 million euros. There's one farm in Texas that uses around 2.5 billion kilowatt-hours of electricity a year, the equivalent of 750,000 homes. The plant has a market value of almost 3 billion euros.

Who runs such farms?

Most customers, also for companies like Smart IT, are very wealthy individuals, mostly entrepreneurs from different industries, who can make the necessary investments directly - because banks usually do not finance at least the first farm.

Will the electricity price destroy the business model?

In Germany, this is actually a bigger factor in the calculation than in other countries. Smart IT already has premises in the #Czech Republic and intends to expand its presence there. The electricity price there is currently 14 cents.

What cryptocurrencies are there?

The best known is Bitcoin, but there have long been many others - and according to Christian Behrens, Bitcoin is a kind of reserve currency, but not necessarily the most profitable. If you want to have a farm, the expert recommends a mix of miners for several currencies, for example Ethereum, Dogecoin or Kadena in addition to Bitcoin.

Users can set up a so-called wallet, i.e. a kind of account for cryptocurrencies, on an online trading platform such as #Coinbase and exchange them there for euros or other currencies if necessary.

What are the future prospects?

#Cryptocurrency prices have fallen significantly in recent months, which is why Christian Behrens recommends getting started right now: Although #electricity prices are high, the hardware is currently rather cheap. Since more and more large companies are increasingly relying on the so-called #blockchain technology and with #ElSalvador and the #Central #African #Republic the first countries to accept #Bitcoin as a means of payment, experts assume that the market will remain permanent - with all the fluctuations that the stock market also has .