Why a good fire protection concept is part of crypto mining 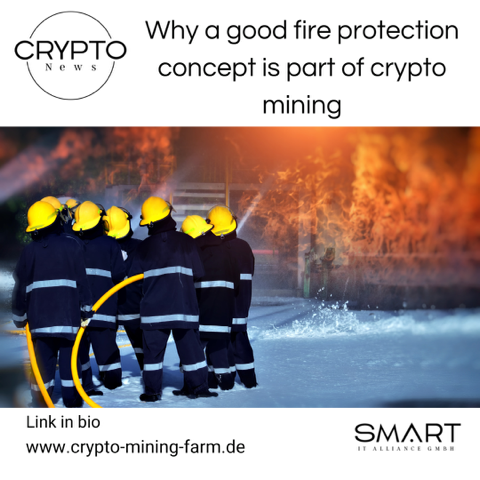 Crypto mining is fun, brings good returns and, in times of economic instability, a relatively secure basis for the next few years. However, it is less fun when technical equipment goes on strike or, even worse, bursts into flames - where #electricity is needed, there is a #fire risk. In the following lines you will find out why a good #fireprotection concept is absolutely necessary and how secure #cryptomining can be achieved.

#MiningFarm operators will know what we are talking about: those who operate many special computers not only have a certain noise level as a result, but also require a lot of #energy, which is consumed by the devices. The right #power connections ensure that the computers can be operated day and night. However, where electricity is involved, #grid errors and #overheating can also occur.

One of the biggest advantages of mining, namely the fact that #MiningRigs, Asics and farms mostly work "independently" without constant supervision, then becomes a disadvantage: If a #cable fire or other #inflammation source develops, it is usually discovered much too late . As a result, equipment worth hundreds of thousands of euros burns down and the buildings are mostly unusable afterwards.

Interestingly, such a case has not been reported once in Europe in recent years. Only in Asia (#China and #Thailand) did mining farms burn down completely. Most recently at the end of last year in Thailand, when a fire caused #damage in #millions. On the same day, there was an unusually high mining time (a full 119 minutes before the next Bitcoin block was found), giving reason to believe that both events were related.

Horror reports of this kind are very reminiscent of news from #Teslas, which often burst into flames during the charging process in underground garages (electricity connection).

The conclusion that can be drawn from this is that European mining farm operators appear to be well positioned in terms of fire protection. In this country we have good electricians, modern technology and prudent concepts, which are indispensable when it comes to operating mining equipment. That's why we always recommend our customers to plan accordingly and are happy to help with advice and action. Insurance is also mandatory and pays for material damage in the event of a fire, but the destruction of the equipment causes a loss of earnings that can last for quite a long time, since a new building and new equipment cannot be obtained on the spur of the moment. Better to be safe than sorry!

In the case of the Teslas, the cause of the fire always had to do with defective batteries, so that the lithium they contained came into contact with oxygen and could quickly ignite. So it wasn't the power supply during charging. It's a good thing that mining devices don't run on lithium batteries!