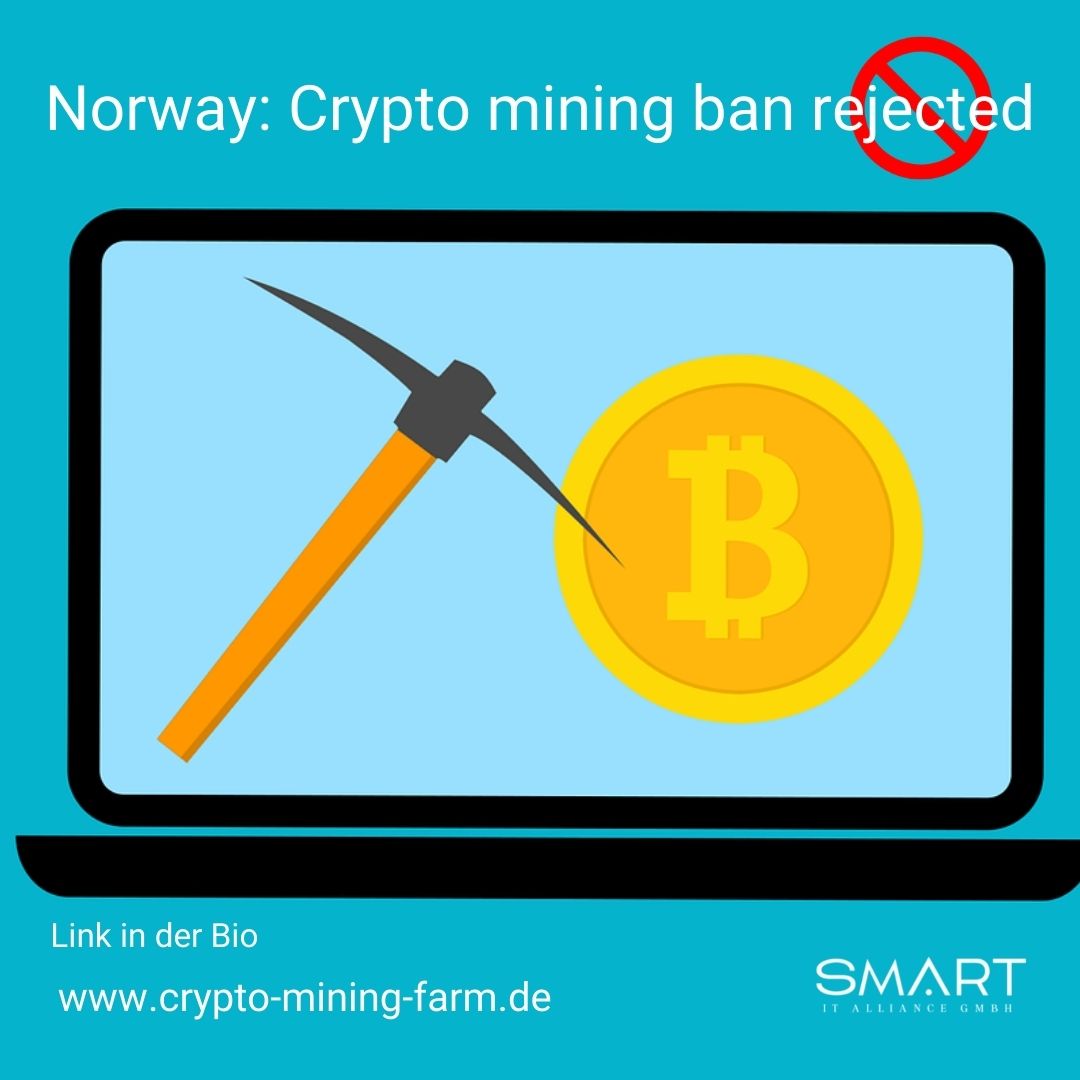 The #ban on #cryptocurrency #mining sought by the #RedParty was not well received by either the #LaborParty or the #CenterParty. In mid-May, parliament decided by a majority not to approve the proposal and continues to give the green light to mining.
However, it remains to be seen whether mining companies will be asked to pay more for the electricity consumed in the future.
#Norway provides almost 1 percent of the global #Bitcoin #hashrate and shines in particular in its pioneering role with regard to sustainability. The mining of cryptocurrencies is operated here exclusively with renewable energy, which mainly comes from hydropower. Due to the cheap and good access to renewable energy sources, the mining business in #Scandinavian Norway is thriving.
According to a report by Norwegian news portal E24, the Scandinavian country's Red Party tabled a bill in March that would ban coin mining in Norway. Parliament voted against the ban by a majority on May 10th. Only the Left Party, the Red Party and the Greens voted in favor of the ban, all other factions spoke out against it.
The reason for the Red Party's proposal is the current electricity situation, which has recently driven up electricity prices. As Storting for Red's Sofie Marhaug explained: "Even if we have enough electricity now, we will have to set stricter priorities in the future, especially if we want to replace fossil fuels with renewable energy and make Europe more independent from Russia“.

Innovations should not be prevented

#Blockchain technology is leading to numerous innovations in many fields, including banking and finance. The high energy consumption is inextricably linked to blockchain technology. The best-known coins in particular, such as the Bition, currently rely on the energy-intensive, so-called Proof-of-Work (PoW) consensus process.
In this context, the Labor Party (AP) and the Center Party (SP) made it clear that they are not interested in impeding innovation in their country through a mining ban.
Furthermore, the ruling parties stated that cryptocurrencies enable secure transactions and are therefore important, especially in countries and markets where trust in the authorities is weakened.
“It is no coincidence that the cryptocurrency [Bitcoin] experienced a particular boost in the wake of the financial crisis in 2008, when confidence in national and international banks and financial institutions was at an all-time low.[…] The aim must be to meet the need and reduce demand for cryptocurrency by contributing to a well-functioning monetary system,” the AP and SP explained.
The Minister for Local and Rural Affairs, Bjorn Arild Gram, also warned that a mining ban could weaken Norway's competitiveness. According to Arild, data centers are important prerequisites for future success in the digital economy.

In Norway, industry benefits from a reduced electricity tax. While private households pay an electricity tax of 15 øre per kilowatt hour, industry only pays around 0.55 øre per kilowatt hour.
Jaran Mellerud, an analyst at Arcane Research, told Cointelegraph that the only policy tool the Red Party has left now is an energy tax increase specifically for miners. Mellerud also explained that crypto-hostile parties have been trying for a long time to achieve a higher energy tax for miners in order to drive them out of Norway.
As recently as February, however, the Norwegian government refused to increase the tax rate for crypto mining to the full fee.
It remains to be seen whether higher taxation for mining companies will be implemented in the future, but Mellerud considers this unlikely in view of the latest vote.